Apple has just released the new iOS 4 update for iPhone and iPod touch users.This release has been made available 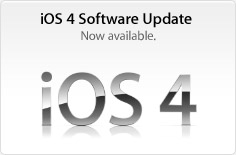 couple of hours ago by apple.Although iPhone 4G will be in stores on thursday (which has been already extensively preordered too), this update is still available for the existing iPhone owners to take advantage of the new software features.

The exciting new update of iOS, 4.0 has more than 1,500 backend changes and many additions to API which will make the app development for iPhone alot easier and feature rich process resulting in much better and advance apps on these devices.

Some of the highlights of the iPhone iOS 4 are:

These are just a few of the features out of tons of new improvements in iOS 4. The new firmware is simply amazing!

So what are you waiting for? update your iPhone to iOS 4! but wait! for those who have unlocked and / or jail broken iPhone, it will destroy their jail break and can result in permanent locking of the iPhone.